It was during the construction of the CPR during the 1880s that copper ore was discovered and sparked a flurry of mineral exploration and mining claims. Since then, Sudbury has been known as a major mining and smelting centre, producing not just copper but becoming a world leader in the production of nickel. As the new railway opened up accessibility to the mineral resources in the area, many mining and smelting companies were incorporated such as The Canadian Copper Company, Mond Nickel, British America Nickle Co. (BANC), Dominion Nickel, International Nickel Co. (INCO), and Falconbridge Nickel.(The first four would later be absorbed by INCO to become the major player on the Sudbury scene.)

Much of this ore would be moved between the mines and the smelters by rail, so transport of both ores and finished products is a major part of the rail scene in the Sudbury area. The mining companies had their own private railways connecting some of the mines, and other mines were served by the “common carrier” railways: Canadian Pacific, Algoma Eastern (later part of CP), and Canadian Northern (later Canadian National).

Sometime around 1910, the Hart-Otis Car Company of Montreal patented a drop-bottom gondola design, whereby doors in the floor of the car could be operated by geared handles on the ends of the car to discharge its load to the sides of the track, which would quickly become popular across Canadian railways with short steel versions of these cars being adopted as the standard car for shipping raw ore for INCO in the Sudbury region.

The early Hart-Otis design cars used by INCO were a 22’5″ interior length car with 4 drop-bottom doors on each side. Interior bracing give the cars a nice smooth-sided appearance. Canadian Pacific, Canadian Northern (later Canadian National), Algoma Eastern, and INCO themselves all rostered cars to this basic design and size. (When CP went to a larger car size as we will see below, CN and INCO continued to also use cars of this smaller size at some of their operations.)

The CP cars were built (probably by Canadian Car & Foundry in Montreal) in three batches totaling 200 cars between 1914 and 1919. Another 125 were built for the Algoma Eastern, which would later be transferred to CP in the early 1930s after CP leased the AER and absorbed its operations. An unknown number of identical cars were also owned by INCO.

By the 1970s only a tiny handful of these older cars would still survive. 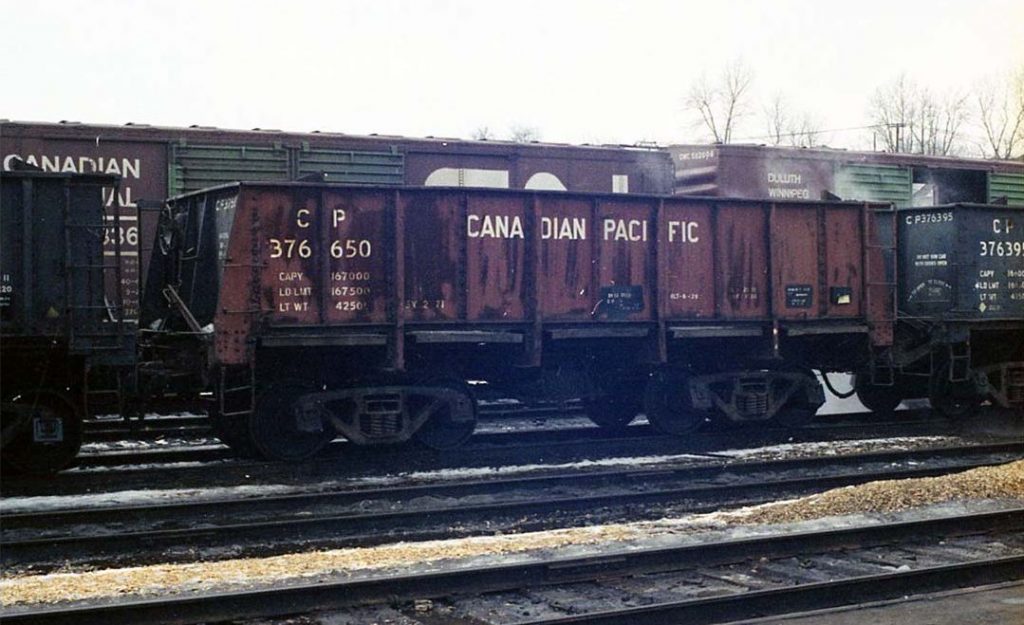 Between 1926 and 1930 Canadian Car & Foundry (CC&F) built 350 cars (in three batches) for Canadian Pacific to a larger size of 25’11” interior length. The extra 3’6″ of interior length provided an increase of approximately 200 cubic feet over the previous cars and would become the standard ore car size for all new deliveries going forward.

The buttressed ends and riveted Z-shaped side bracing give these cars a rather distinctive appearance among the CP ore car fleet.

In the early 1940s, a number of the cars from this group were rebuilt with side extensions to raise the internal height and add another approximately 300 cubic feet of capacity for service hauling crushed quartz out of INCO’s Lawson Quarry, which began production in January 1942. Other cars from this group were rebuilt in the mid 1970s to convert them from drop bottom to solid bottom cars, which will be mentioned again later further down in this article. A few remained in more or less original condition until retired in the early 1980s. 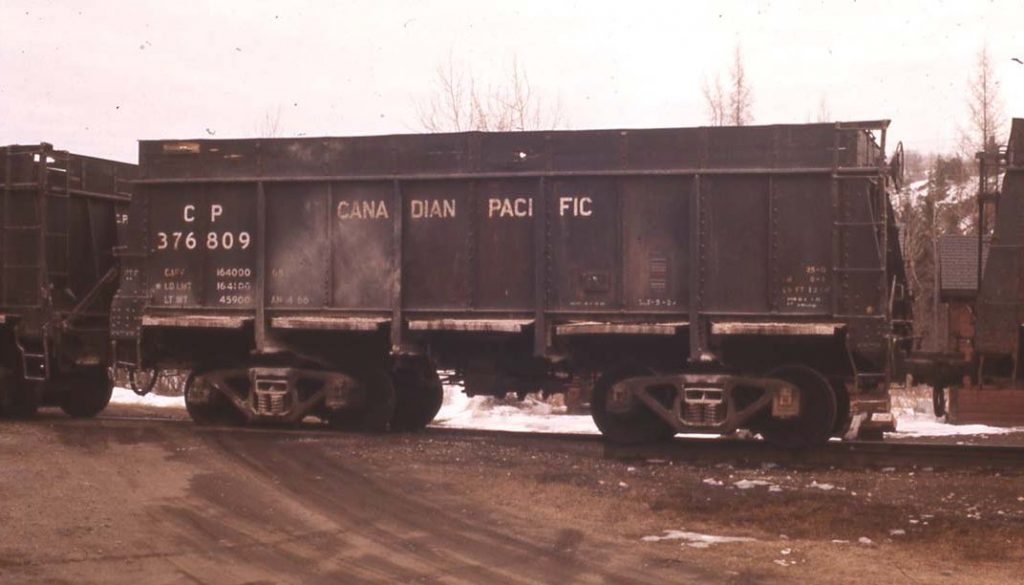 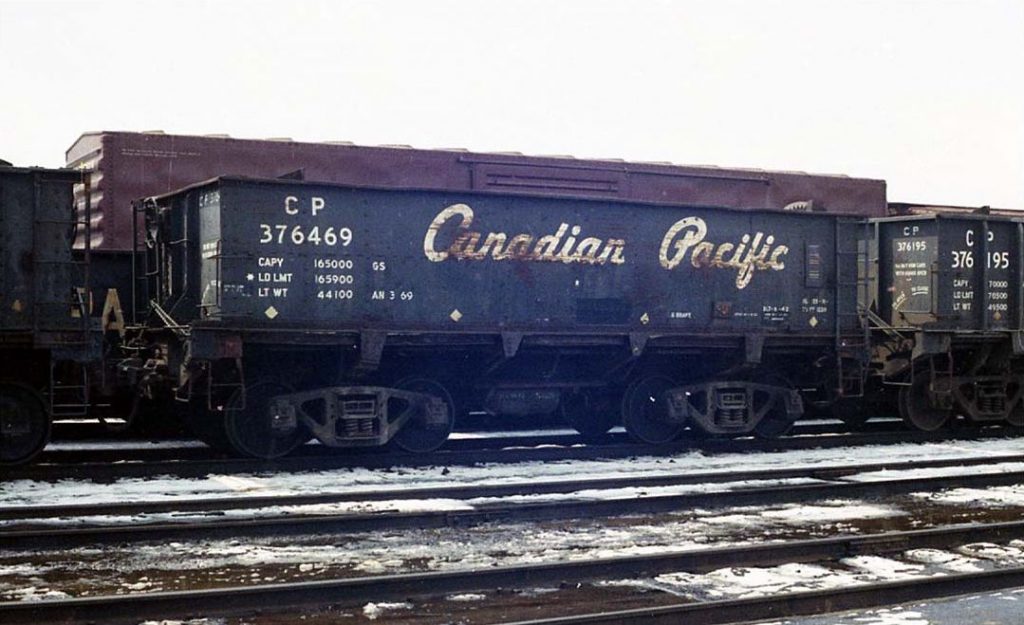 The next batch of new cars acquired by CP were built by National Steel Car (NSC) of Hamilton, Ontario in late 1942, replacing cars that had been transferred to quartzite service (see above). Similar in overall size specifications to the previous 25’11” cars built by CC&F, interior bracing gave these cars a smooth sided appearance similar to the early pre-1920 22’5″ CC&F cars, but unique among the larger 25’11” cars.

While delivered many years before the Canadian Pacific “script” logo and paint scheme was debuted, the smooth sides lent themselves nicely to repainting with this lettering, and by the 1970s it seems most photos of these cars show them repainted in the 1960s script.

In the late 1950s, CP expanded their ore car fleet again, with orders in 1956 and 1957 to CC&F and Eastern Car Co. (ECC) of Trenton, NS for 2 virtually identical groups of 100 cars from each builder. Another 60 identical cars from Hawker-Siddeley Transportation (HST), ECC’s successor company, were added on in 1967. These groups of cars were numbered above and below the existing number series for the 1926-1942 cars.

These cars feature riveted body construction with heavier external bracing compared to older cars. The 1967 order would have been the first (and only) ore gondolas to be delivered in script lettering from the factory. The 1956-57 built cars would have been almost identical construction, but painted in the block lettering scheme. 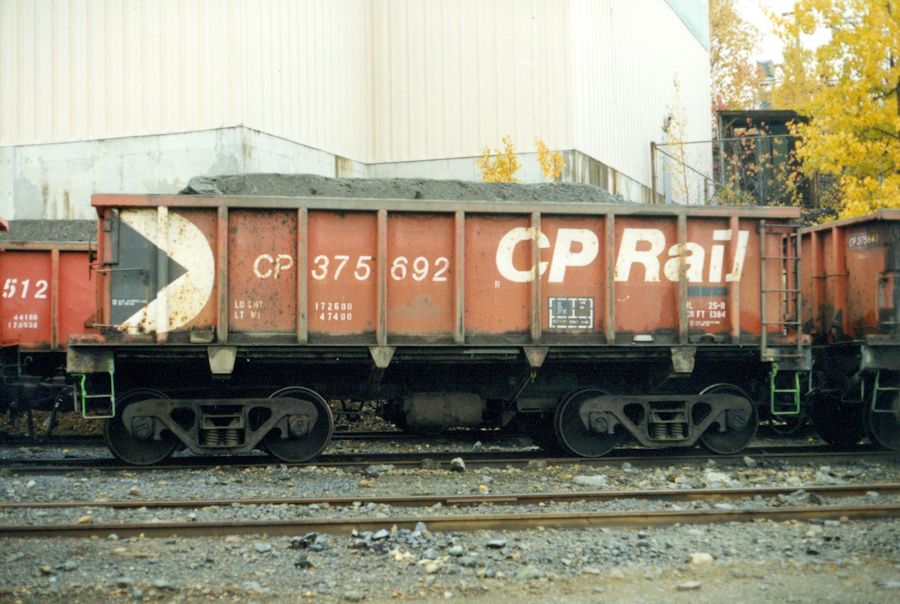 CP’s last order of ore gondolas was this 200 car group built by Hawker-Siddeley in November 1970. While extremely similar to the previous cars built by ECC/HST, these are distinguished by being the only all-welded ore cars (the previous cars being of all riveted construction), and the only group of cars to be painted in the CP Rail “Action Red” paint scheme with the iconic “MultiMark”.

In the mid-1970s, INCO installed a rotary car dumper at their smelter facility in Copper Cliff, converting to rotary rather than bottom dumping. Some 200 cars originally built between 1926-1942 were rebuilt between 1973 and 1979 to remove the bottom doors and replace them with a solid steel floor. These rebuilt cars were selected and renumbered rather at random into the 375800-375999 series and colloquially known as “tight bottom” ore cars.

Many of the newer cars built after 1956 would later simply have their bottom doors welded shut and door operating levers removed to convert them to “tight-bottom” cars and retain their original numbers, which can actually be seen in the photo of CP 376231 above, which lacks its door operating levers, the doors having been welded shut. 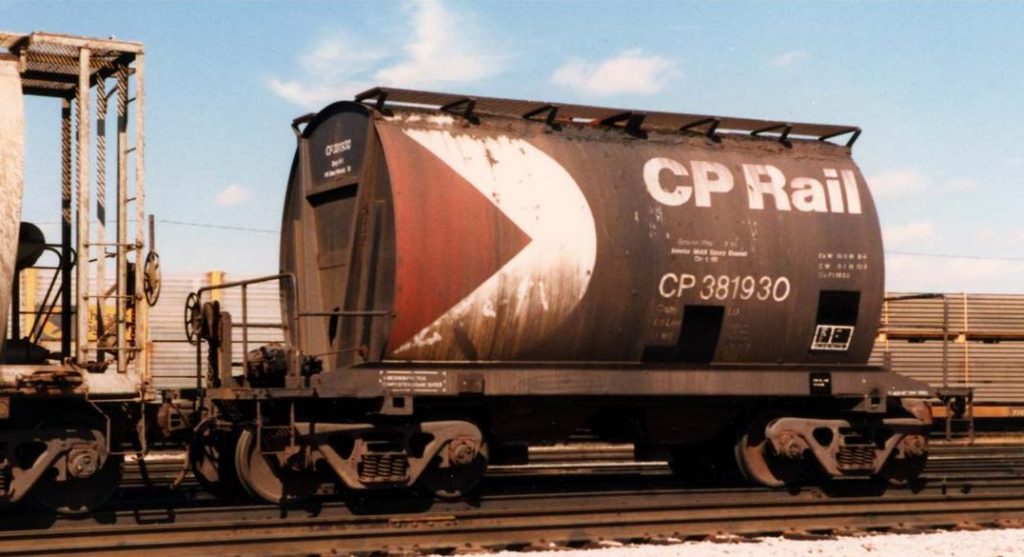 Last but not least, we leave INCO behind and head over to competitor Falconbridge Nickel for something completely different. In the late 1960s, Falconbridge decided to ship concentrated ore as a slurry (finely crushed and mixed with water) between their mine and mill near Levack to their smelter at Falconbridge to the east of Sudbury. To ship this ore slurry, CP acquired a group of very unique cylindrical hopper cars that were dedicated to this service between Levack and Falconbridge. These distinctive cars were built in two separate batches in 1967 and 1969 by Davie Shipbuilding. The ore slurry was abrasive to the interior of the cars, and with the cars wearing out in the late 1980s Falconbridge switched to shipping by truck and the slurry cars were retired. A few survived however, being used as scale test cars by CP.