Introduction was: That ’70s Rent-a-Wreck Fleet
Part 2 was: The Saga of the Bellequip Geeps

By the time Canadian Pacific had fully dieselized their system in the early spring of 1960, a recession had hit the North American markets. Additionally, the CPR was realizing all the efficiencies that a 100% diesel roster provided, and was beginning to unlock their fleet’s full potential. These factors caused the CPR to cancelled purchase orders with General Motors Diesel for more GP9 and SW1200RS locos which were scheduled for delivery later in 1960-61, and it doomed all remaining stored steam power for good. It also created a stable four-year period between 1960-64 for the CPR’s motive power needs, where they rostered sufficient locomotives to meet all traffic demands. From 1964 right up to the present day, the Canadian Pacific Railway would never again have such a time. 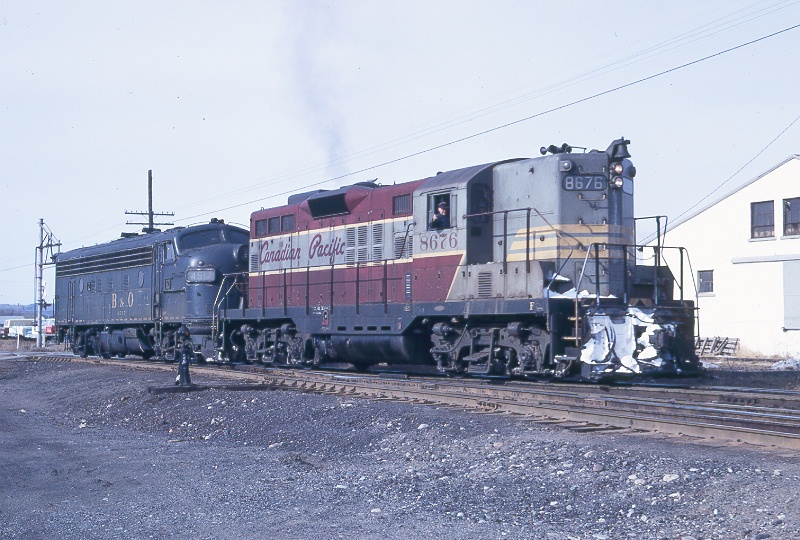 Over the winter of 1964 the CPR entered the wonderful world of locomotive leasing. Forced into it by a sharp traffic upturn, their short-term solution was to lease several A-B-A sets of Union Pacific Alco-built FA-1 and FB-1 locomotives. These 1600hp cab units were early diesels built after the war in the late 1940s, and they were never a favourite of the UP who tended to run them hard with deferred maintenance. In fact the UP had tied-up this fleet earlier in 1963, and then re-activated them specifically for the CPR to lease. When they were returned later in 1964, the UP promptly retired them all and used them for trade-in for credits on new EMD locomotives. They literally ran their last miles over the CPR.

After dipping their toes into leasing with the cantankerous UP FA-1/FB-1 fleet, Canadian Pacific refined their rental practices throughout the late 1960s into a useful and effective strategy. Future leases included diesels from such diverse owners as the Bessemer and Lake Erie, Boston and Maine, Bangor and Aroostock, and the Chicago Great Western. All of these leasers proved to be of much greater reliability, and held a number of assignments over this time. Though they operated mainly in the CP Eastern Region, it was not unheard of for leasers to reach as far west as Calgary. Leasing numbers were highest over the winter months when traffic levels hit their peak, and coincidentally when CP’s own locomotive reliability stats suffered from the legendary cold Canadian climate.

Locomotive leasing really peaked in the early 1970s, as CP Rail began running robot coal trains to the new Roberts Bank Superport, and the Canadian government had inked large grain export contracts with both the Soviet Union and China. By January 1972, CP Rail already had over 75 leased units in service, primarily from locomotive leasing pioneer Precision National Corp. But by February the motive power crunch hit a critical point, and CP was forced to take anything that was available. Enter the Baltimore & Ohio F-unit lease fleet. 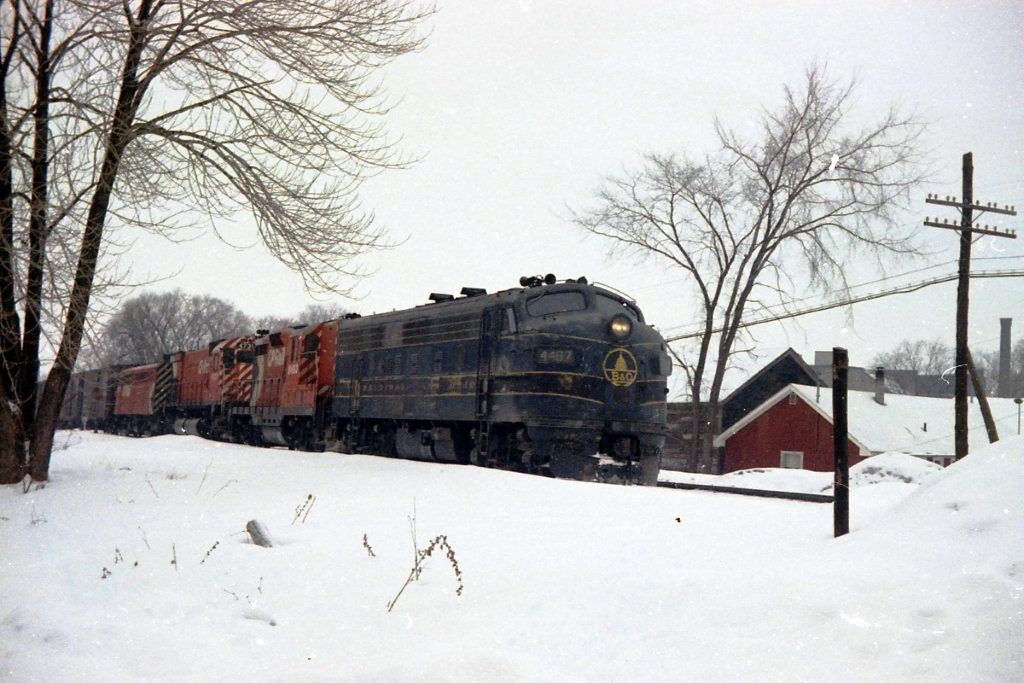 Travelling between Sudbury and Smiths Falls over the Chalk River line, B&O 4487 leads GP9 8493, M-636 4731 and FA-1 4015 on train #974 through Carleton Place ON on 27 February 1973. This photo helps illustrate two points; that B&O F7As could and did lead while leased to the CPR, and that the motive power bureau wasn’t too picky about diesel arrangements when lashing locomotives together during the 1970s. (Bruce Chapman photo)

The once mighty B&O F-unit fleet had become a shadow of its former self by the early 1970s. Back in the day they were a staple of mainline operations, featuring 155 F7A and 104 F7B units. There were also older F3 models (some upgraded to F7 standards) along with second-hand F7’s purchased from the Bessemer & Lake Erie, and a number of 7000-series F7A’s transferred from the Chesapeake & Ohio (C&O had acquired controlling interest in the B&O in 1962). However by 1972 the B&O F7-fleet was significantly diminished through attrition, and were being used as trade-in bate towards new EMD GP38 and GP40 locomotives. The surviving F-units were holding down secondary freight and local coal mine shunting assignments. To put it bluntly, they were in rough shape. 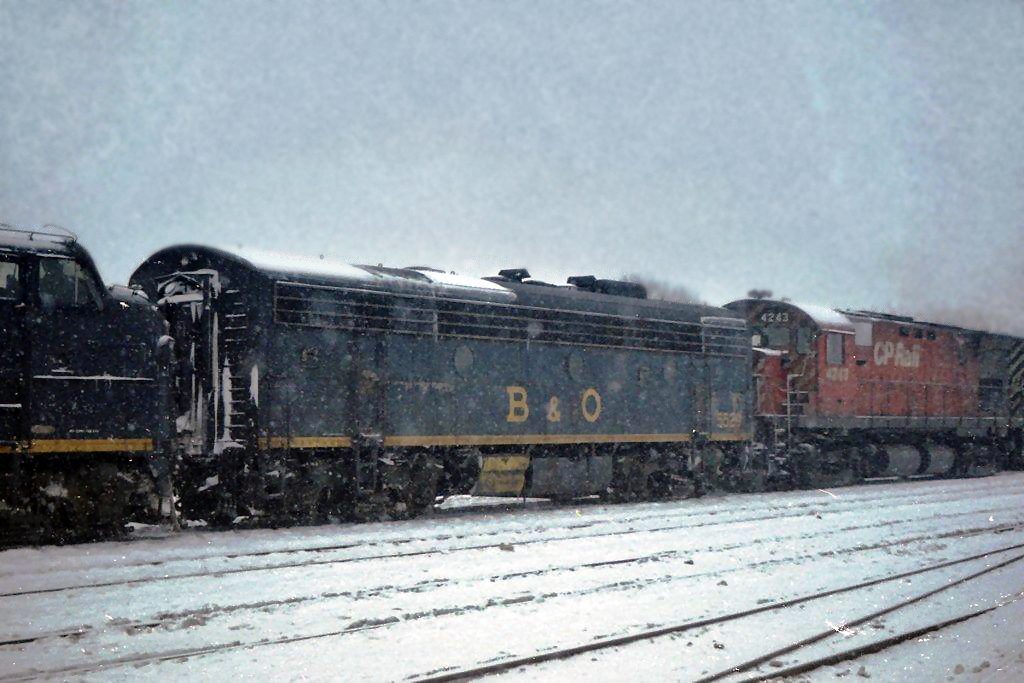 The B&O began transferring the F-units from Detroit MI on 08 February 1972, and all the leasers were initially inspected at CP’s Windsor Yard before entering service. In a foreshadowing of their decayed state of maintenance, five of the first leaser locomotives to arrive were judged to be mechanically unsound and were returned to the B&O. Another five units would arrive later to comply with the lease contract. (See roster below for details.)

The CPR was in such desperate shape for power that the first three units accepted for lease (F7A 4622 & 4646, F7B 5498) were almost immediately placed on local manifest freight #74, and left Windsor ON for CP’s Agincourt Yard in Toronto on February 10th, 1972. After arrival the trio were promptly placed on train #955 to travel north up the MacTier Sub to Sudbury ON, and eventually wound up in Chapleau ON the following day.

Ultimately a total of 28 F7A, F7B and even a pair of FP7 diesels would be leased to the CPR over the 1972 traffic crunch. Most wore the spartan post-B&O/C&O merger Enchantment Blue scheme, but at least two F7A locos (4487 & 4499) and an F7B (5477) were still sporting the classic late-50s B&O double blue / yellow pinstripe scheme. Another trio of F7A units (4517, 4622 and 4645) wore the remains of B&O’s famous, albeit short-lived early 1960s ‘Sunburst’ scheme, though all their noses had been repainted and lost their attractive sun rays in the process. As if that wasn’t enough variety, all the 7000-series F7A locos transferred from parent Chesapeake & Ohio were wearing hastily patched C&O paint in various states of degradation. 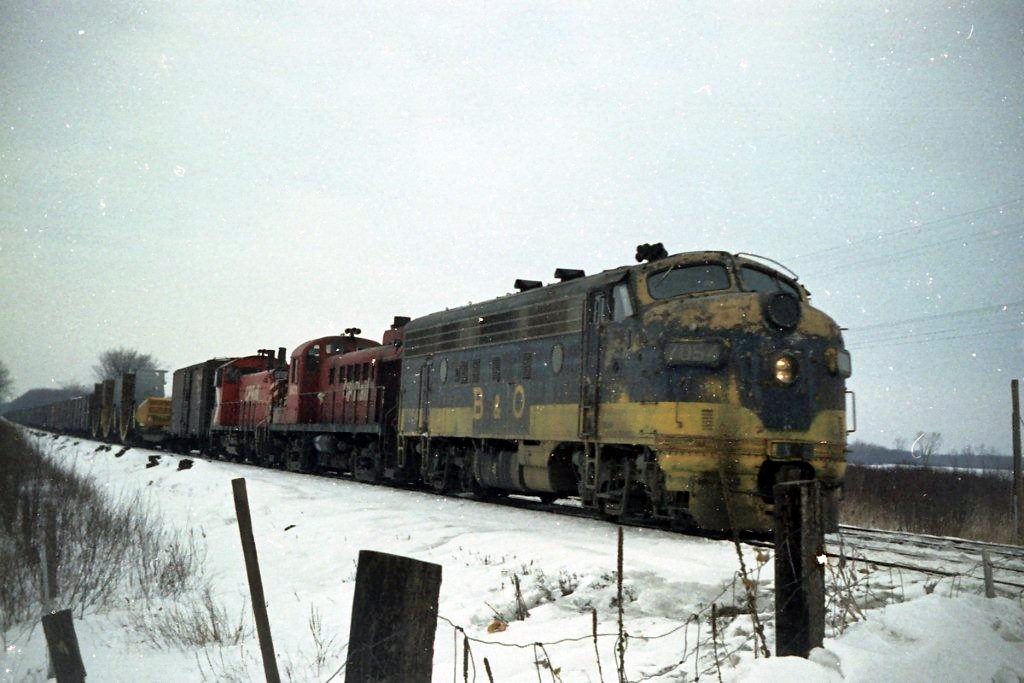 As one would expect, this combination of B&O paint variations coupled with CP’s own radical corporate image change, plus the riot of colours available in the leased ‘rent-a-wreck’ fleet, resulted in a particularly vibrant period of CPR motive power lash-ups. Possibly the wildest incident involving B&O leasers (recounted by a credible source) was of a CPR employee (and closet railfan) who proceeded to chase northbound train 955 from Toronto up the MacTier Sub into a blinding snowstorm. The reason? On the point was a perfect A-B-A consist of B&O 4487, 5477 and 4499, all adorned in the old late-’50s double blue / yellow pinstripe scheme. 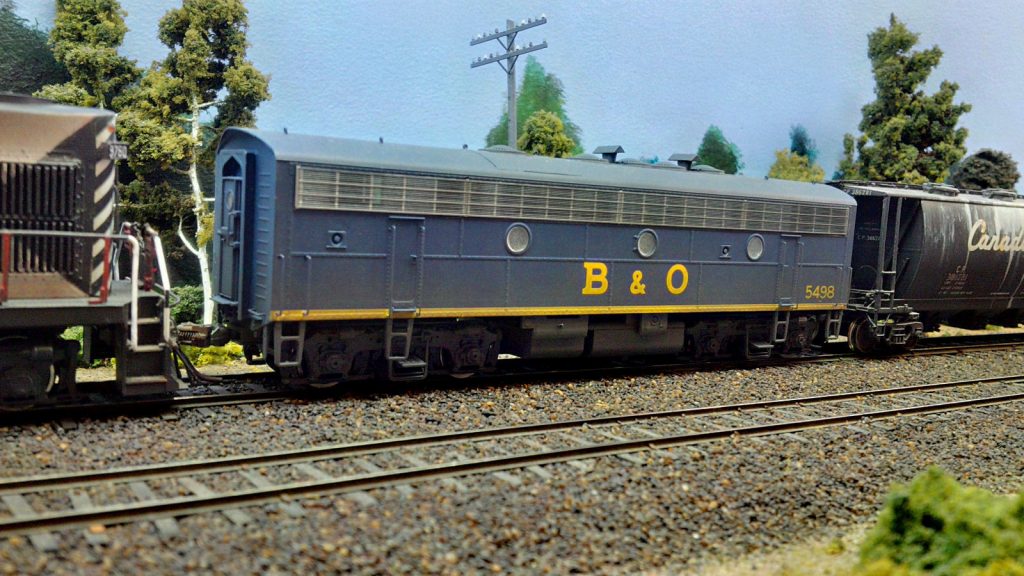 B&O 5498 is the trailing unit on train #911 at Nairn ON on the WRMRC’s CP Sudbury Division layout. Model was completed by the author from a powered Intermountain F7B, with Polyscale paints and Microscale decals. The unique B&O spark arrestors were scratchbuilt from styrene.

Whether it came down to duct-tape, bailing wire and ball-peen hammers to keep these weary beasts rolling, the CPR shop crews faithfully maintained these F-units until the initial lease ended in August of 1972. But only four short months later a number of these original leased units would return again, along with a few new numbers, to help out with the ’72-’73 winter season. All B&O F-units went off lease and were returned to home rails by the end of April 1973.

However it would not be the end of spotting leased ‘Chessie’ power on the CPR, as they and successor Chessie System (the official merger of B&O / C&O and Western Maryland) seemed to have forged a rental relationship that resulted in leased C&O GP30 and GP35 units operating through 1979-1980, and again between 1984-1989 with B&O GP38 and GP40 locos. But as Canadian Pacific began amassing their own large fleet of SD40-2 locomotives throughout the 1970s, that signalled the end of a particularly evocative and polychromatic era of locomotive leasing, and the B&O F’s were operating right in the middle of it all.

On a final note, the Baltimore & Ohio F-unit rental experience did somewhat emulate the Union Pacific’s FA-/FB-1 fleet from almost a decade earlier, as many of these F’s were placed into storage after their return to home rails. A good number also soldiered on for a while, but eventually all would be used for trade-in credits towards new Chessie System GP38-2 and GP40-2 diesels from General Motors. Just as before, there were rent-a-wrecks operating their last revenue miles on the CPR.