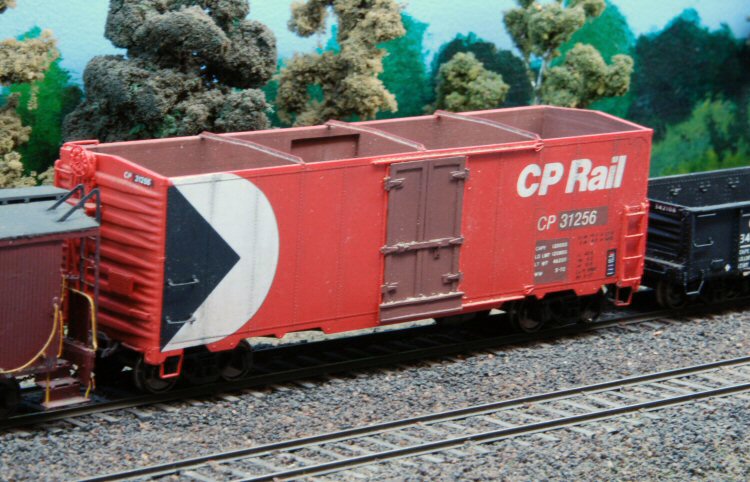 Using old 40′ box cars in woodchip service is nothing new to railways or to CP in particular. Canadian Pacific began removing the roofs of ancient 42000-series wood, double-door boxcars in the late 1960s and using these cars in Eastern Region woodchip service. They also made similar modifications to about 50 International of Maine PS-1 40′ boxcars for use in Northern Maine in a joint service with the BAR. CP never bothered to renumber these cars, but just added footnotes to the equipment register. In the summer of 1978 CP began to modify a number of 40′ boxcars for Northern Ontario woodchip service, finally giving them new road numbers in the 31200 series. The roof panels of most of these cars were simply cut off with torches, leaving the ribs in place to hold the car together. These ribs, now acting as tie bars to stabilize the sides, took quite a beating in service and most cars would be seen with some ribs missing. This series was quite a mixed bag of cars from various series of 40′ cars, and even some of the old International of Maine rebuilds with the extended sides were also renumbered into this series and ended up in Northern Ontario service.

This car features a scratchbuilt door which matches the special doors that CP applied to a large number of these cars (many cars did retain their original doors instead.) As on all the other models of this type of rebuilt boxcar, the remaining roof ribs are represented with Plastruct T-section.