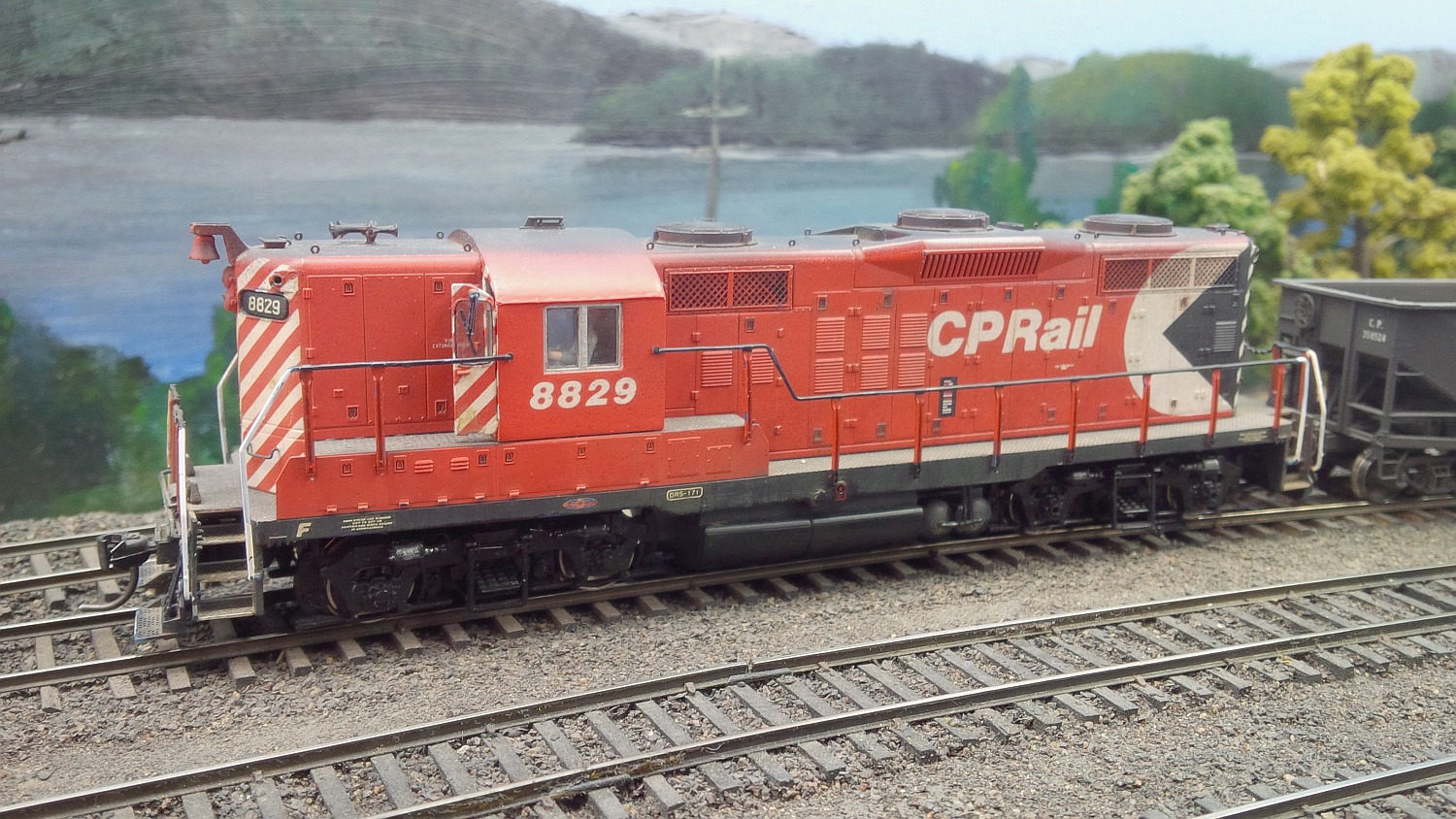 Until the mid-1970s, the diesel locomotive which best exemplified the Canadian Pacific had been the GP9. Between 1954 and 1959, the CPR acquired six orders of GP9s for a total of 201 units. When combined with their 17 earlier built and nearly identical GP7s, the sum comprised over half of the railway’s road switcher fleet. Despite their strength in numbers the GP9s were all assigned to the CPR’s Western Region, and the units became synonymous with the prairies and the Rockies. It was not until massive purchases of SD40-2s in the 1970s that this considerable fleet began to become displaced, and finally could be seen operating through northern Ontario and even into Quebec. It is in this light that we find this model of CP Rail 8829 running on the WRMRC layout. Painted in the 5-inch “Candy-Stripe” CP Rail paint scheme, the 8829 represents a unit from the sixth and final order of GP9s for the CPR ( class DRS-17f ). Among diesel buffs this unit is identified as a phase-3 GP9, with the main identifying feature being the redesigning of the roof cooling system into a set of three 48-inch exhaust fans. Less obvious features include a new cutaway side-skirt allowing easier access to the fuel tank and underframe, and almost complete absence of louvers on the battery boxes under the cab.

This model of the 8829 was created by Ted Kocyla from a unit out of the original production run of Proto-2000 GP18s released in 1990. At the time this GP18 was the only properly dimensioned and good-running “geep” on the market, aside from the original run of Kato-produced Atlas GP7s which required quite a bit of work to convert into a late model GP9. However the P2K GP18 was relatively straight-forward to convert into a phase-3 GP9. Changes made to the locomotive include; the replacing of the slotted-style GP18 filter screens with Train Station Products chicken-wire GP9 screens, changing the Life-Like installed late model GM 48-inch fans with earlier wire-screen ones appropriate to this unit, and some minor side-skirt modifications to accurately reproduce those found on the 8829. Aside from these main modifications, appropriate CPR nose bell, airhorn, radio antenna and other minor details were applied to complete the model. The 8829 was then painted with Accupaint “CP Action Red” and finished with a combination of Microscale and Accucal decals. A few years after Ted completed this model, Proto-2000 introduced a phase-3 GP9 which, naturally, is a much easier starting point towards modelling a CP class DRS-17f GP9.