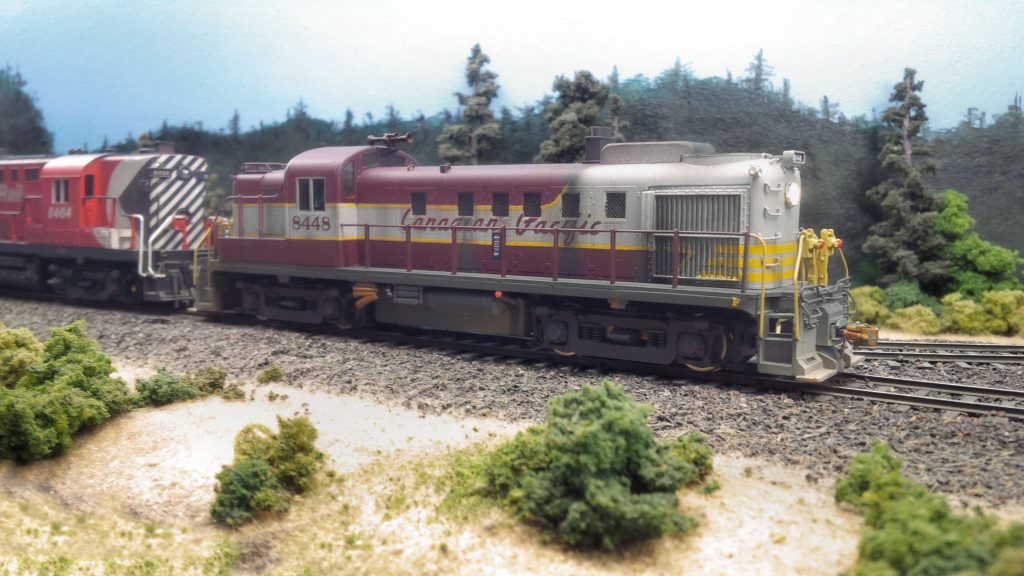 CP # 8448 leads the Espanola Turn through Nairn Ont. in the summer of 1973. In reality; this is a Van Hobbies brass model rebuilt with a Kato RS-3 drive. It is equipped with an ESU LokSound decoder with a 12-cylinder 244 diesel sound file.

Years after most other major North American railways purged their rosters of 244-powered ALCO diesels, CP Rail continued to employ a good-sized fleet of them throughout the ‘70s. Mainly due to chronic motive power shortages, and maybe a little by their corporate desire to milk locomotives for every mile they could to ensure their return on investment; the CPR would continue to operate 244-powered units until 1982.

In this light we find a pair of old soldiers in charge of the Espanola Turn on the CP Webbwood Sub, continuing to battle friction and gravity in defiance of the scrapper’s torch.

CP #8448, built by MLW in 1954, is noteworthy for being the second-last RS-3 to wear maroon and gray paint. She would eventually receive a new coat of Action Red in 1975, only to be retired the following year due to a major mechanical failure.

RS-10 #8464 fared a little better. Rolling out of MLW later the same year as sister #8448, she would persevere to the end of the decade. It should be noted that regardless of the differences in exterior appearance, the RS-10 is mechanically the same as an RS-3.

The model 244-diesel prime mover may have been plagued with reliability issues and earned a notorious reputation as a maintenance hog, but they endure at the time-warp known at the WRMRC – CP Sudbury Division layout. Here the 1970s never ended, and the burbling sounds of 244 diesels continue to echo throughout the Sudbury Basin.

One thought on “Old Soldiers”